Hella awesome video from the guys at Sideburn called This is Dirt Quake.

"This is Dirt Quake, Sideburn magazine's day at the races. A 'Go fast, turn left!' celebration of the can be arsed, their 'It aint what you ride, it's the way that you ride it' manifesto made manifest as inappropriate flat track & chopper speedway racing..."


Keep a eye out for the inappropriate road bike category, definitely a highlight.


Seriously need to think about getting the bike onto the flat track after watching this.

Email ThisBlogThis!Share to TwitterShare to FacebookShare to Pinterest
Penned by LSG at 3:37 PM 0 comments

So every now and again I watch a handful of videos to reignite my imagination for motorcyling, to either get me inspired to ride, or inspired to keep those wrenches turning.

Most of you have probably seen these before, but these are my top five all beautifully shot.


Matt seems like a great guy, no BS and doing what he loves.  All the while learning in the process to create some stunning machines.  His workshop in the Australian countryside brings serenity to the process of this disruptive artform.

This film is based around Dustin Kott who runs and owns Kott Motorcycles.  He speaks candidly about his first beginnings into the world of motorcycles, and his influences in creating the bikes he does today.

Number 3 - It's better in the wind


Inspired by the book "The Road Not Taken" by Robert Frost and "Easy Rider".  This movie documents the travels of a group of friends through country America.  This is a great short film and really emphasises what riding a motorcycle is all about.


This film was probably one of the first well shot videos I saw about a custom shop.  It's the story behind Twinline Motorcycles, their philosophies, beliefs and motivation in running this Seattle based custom shop.


You probably all knew what would be number 1.  But this was by far the most influential motorcycle film to be released recently.  Not only because of the subject matter but the way it was shot.  A rare look into the world of the man responsible for the Zero-Style motorcycle.

Email ThisBlogThis!Share to TwitterShare to FacebookShare to Pinterest
Penned by LSG at 7:16 PM 0 comments 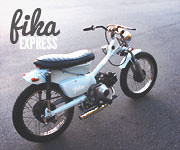